Regina city council’s executive committee has approved a tax exemption for non-profits and daycares, as well as a new McDonald’s at Evraz Place and a $700,000 grant for the Regina Exhibition Association.

Wednesday’s decisions from the executive committee will now go to the full city council on Dec. 16 for a final vote.

The executive committee was also supposed to get an update on the city’s finances and budget at its Wednesday meeting. However, due to a lack of time, that was moved to a future committee meeting.

The committee voted unanimously earlier in the day to a two-year extension of a 40 per cent tax exemption for licensed non-profit daycares. The exemption was in place before the COVID-19 pandemic, and delegations spoke to the importance of continuing it.

“During this COVID-19 pandemic, many centres have been hit very hard,” said Cara Steiner, the executive director of the Prairie Lily Early Learning Centre.

“We are all struggling to keep up financially,” she said. “This exemption, if it is continued, will allow us a small bit of breathing room.”

Councillors spoke in favour of the tax exemption extension, including Ward 2 Coun. Bob Hawkins, who said he wanted to salute the daycare workers for their efforts during the pandemic.

“I can’t think of a better investment of taxpayer dollars that this council will ever make in the children of our community and the daycare workers who are looking after them,” Hawkins said.

The committee also unanimously approved tax exemptions for 26 non-profits in the city, with varying amounts to be taken off their taxes.

Ward 6 Coun. Dan LeBlanc proposed a motion to remove the RCMP Heritage Centre from the list, saying in his view, it didn’t match what the other non-profits do for the community. His motion was voted down 6-5.

Originally, the Girl Guides of Canada were not set to be included in the tax exemption list, as the organization is not accessible to all people and has multiple locations.

However, councillors voted unanimously to include the organization, and asked city administration to review the criteria for tax exemption requests.

“I worked very closely with the Girl Guides as a young person … and with my children,” Ward 7 Coun. Terina Shaw said. “I believe that they’re instrumental in the success and the leadership that women play in society.”

Some of the other non-profits that applied for the exemption include Theatre Regina, the Globe Theatre, the MacKenzie Art Gallery, Regina Humane Society, Regina Public Library and the Regina Food Bank.

The exemptions would cost the city about $1.17 million.

The committee also heard from the Regina Exhibition Association Ltd., or REAL — the not-for-profit corporation that operates Evraz Place — on a grant proposal and debt increase, as well as about a proposed lease of land to McDonald’s Restaurants.

REAL applied for the $700,000 grant to help keep the association afloat and make the interest payments needed on its debt. REAL also applied to have its debt limit increased from about $8 million to $21 million.

“At the end of the day … it will return to the City of Regina regardless,” REAL CEO Tim Reid said of the grant proposal.

City administration told councillors they are fairly certain REAL will need to take on additional debt, but they don’t know how much at this time, leading to the request for an increased debt limit.

The committee voted unanimously in favour of the grant and debt proposal.

The committee had a longer debate about the proposed McDonald’s, and some questions were left unanswered. 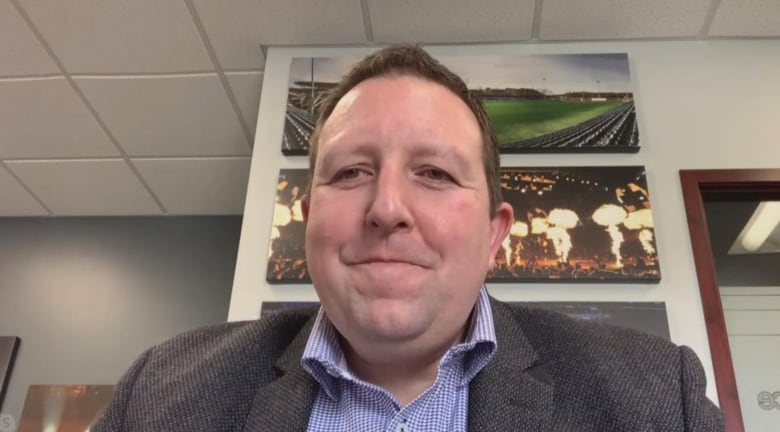 Tim Reid is the president and CEO of the Regina Exhibition Association Ltd. (Skype)

Reid said McDonald’s approached REAL about a vacant portion of land where the fast-food chain proposes building a restaurant. The proposed 40-year lease agreement would be for $60,000 a year.

“It can be a key catalyst for development at Evraz in the future,” Reid told councillors. “We think that this is likely more imperative today than ever before.”

Councillors raised questions about what REAL was doing to bring in local tenants. Reid said the two land plots beside where the proposed McDonald’s would be are earmarked for local businesses.

“We’ve long wanted REAL to be sustainable on their own. This is one undertaking,” Ward 4 Coun. Lori Bresciani said.

However, other questions about exclusivity of similar restaurants in the area were left unanswered. In the end, the proposal passed, with only Ward 8 Coun. Shanon Zachidniak opposed.