Juliana Pizza could have been called Peter’s Pizza when it opened in 1972. 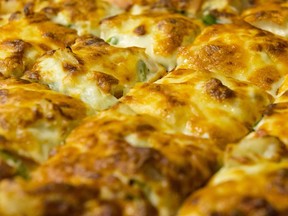 Juliana Pizza could have been called Peter’s Pizza when it opened back in 1972.

Among three different sets of owners, the west Regina pizza place has always had a Peter.

Today, it’s Peter Yannitsos, who bought Juliana Pizza with his cousin-in-law Paul Howie back in September 2006.

Since Tom Yianibas and Pericles (Peter) Dionissiou opened the restaurant 45 years ago, and Petros (Peter) Counios and Cosmas (Gus) Markatos took it over in 1978, Juliana has seen a few changes.

The location, for one: It moved to its present spot in 1985, another store within the same 4th Avenue strip mall.

And, Yannitsos believes the “old guys” would shake their head at the dough press in the kitchen, which allows cooks to easily roll out the dough for more than 1,100 pizzas every day.

Aside from that bit of modernity, “I don’t know if it’s really changed that much,” says Yannitsos, who remembers his restaurant from childhood — previous owner Markatos was “like an uncle” to him. 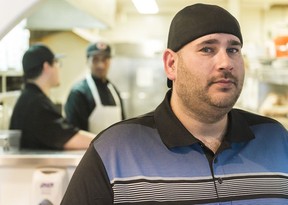 “We’ve always tried to keep the same premise of what it’s always been, just a small neighbourhood family place that serves good quality food at a decent price. When we came in, that’s what we always wanted to maintain,” says Yannitsos.

“A lot of our regulars have been regulars for 40 years. There’s people who’ve been coming here since the day it opened.”

“It’s more of a family tradition,” says Counios, who still pops in to visit from time to time.

The all-dressed, the most popular order, is four centimetres thick. A large pizza for $32.95 can feed three to five people. 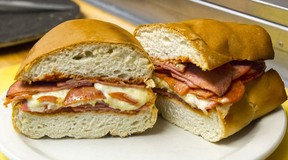 Baked in a pan on a stone in the oven, it cooks hotter than the average pizza.

There’s more on the menu than pizza — like the “half loaf” brute sandwich, so named because it is literally a half loaf of bread.

In the simple dining room, a group of four regulars meet here almost every day for lunch. They’ve been coming here since 1972, growing up in the area and having attended Martin Collegiate across the street.

“It’s their second home,” says Chrissula Kounios, a server who has worked at Juliana almost as long.

She came to Regina from Greece in 1980, following her cook husband Leo to work at his brother’s Juliana Pizza. (When they came to Canada, says Counios, Kounios’ last name was altered.)

Their story is similar to that of many Greek people who came to Canada, working in restaurants and then building a new Regina food scene.

Yannitsos’ parents were among them.

His mother Martha came to Regina 50 years ago. Her future husband Jim followed, as his brothers lived here too.

Martha was a 17-year-old dishwasher who learned English by listening to servers place orders. Jim worked in the kitchen and learned the same way.

An easy way to address the language barrier was to attach a number to each menu item.

After a while, says Yannitsos, restaurants are all you know.

His parents had several over the years — Wheatland Cafe, J & J Cafeteria, Phil’s Steak and Pancake House, and Delight Pizza.

Greek immigrants have operated many of the city’s restaurants in the past half-century, and are responsible for Regina’s pizza boom that began in the early 1970s.

The Kolitsas brothers started the charge in 1970 with their first Houston Pizza on Hill Avenue.

During Monday’s lunch, side by side on Juliana’s grill were a Denver omelette and three sticks of souvlaki — “that’s Regina Greek restaurants right there,” says Yannitsos. 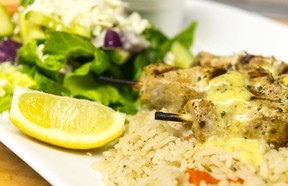 Greek restaurateurs adapted to their clientele. Pizza is traditionally Italian, not Greek, but “I think they saw an opportunity,” says Yannitsos. “I think there was a demand for it.”

In 1969, Regina’s pizza places were limited to Gondola, Tubby’s, Sammy’s and one location of the early franchise Boston Pizza — managed by Agiortis.

Copper Kettle, locally famous for its pizza, was also around at the time.

While the big three expanded into franchises across Saskatchewan and Alberta, Juliana Pizza didn’t go the chain store route.

The previous owners wanted a small family place, “and that’s what it’s always been,” says Yannitsos.

“We don’t try to be anything we’re not. We’re not fancy, high class. We were always just the neighbourhood place,” he adds.

“I think pizza’s kind of a get-together type food; you order pizza and hang around with family. That’s basically what we’ve always tried to be, and it’s worked for us. We’ve always maintained the neighbourhood, the west side of the city.”

Juliana won’t deliver east of Winnipeg Street or to the far south-end neighbourhoods of Whitmore Park and Hillsdale. It just takes too long to drive the distance.

Sign up to receive daily headline news from Regina Leader-Post, a division of Postmedia Network Inc.

Thanks for signing up!

A welcome email is on its way. If you don’t see it, please check your junk folder.

The next issue of Regina Leader Post Headline News will soon be in your inbox.

We encountered an issue signing you up. Please try again

Postmedia is committed to maintaining a lively but civil forum for discussion and encourage all readers to share their views on our articles. Comments may take up to an hour for moderation before appearing on the site. We ask you to keep your comments relevant and respectful. We have enabled email notifications—you will now receive an email if you receive a reply to your comment, there is an update to a comment thread you follow or if a user you follow comments. Visit our Community Guidelines for more information and details on how to adjust your email settings.