After COVID-19 restrictions shut down the restaurant Miranda Holt was working at early last year, the Regina server felt it was time for a career change.

With a permaculture design certificate under her belt, Holt knew she had to dig into her dream job: urban gardening.

“It was that moment of ‘what do you want to do with your life? Pick what you love and do it,'” she remembered thinking.

Last fall, when Holt heard her friend’s sister, Candace Benson, had taken a similar course, she knew she had a business partner.

“There was just this spark. Finally, someone else wanted to do it,” Holt said. “Sometimes, that’s what you need to have that push.”

From there, the pair came up with their City Street Farms business plan. They would transform people’s yards into vegetable gardens, and Holt and Benson would maintain them — as long as the homeowners paid for the water and a one-time fee.

Throughout the season, the produce would be divided up between the business, the homeowner and the local food bank.

They first announced their idea on Instagram, which is where they found people willing to convert their lawns into gardens. After closing applications in April, they settled on five yards — mostly in the Lakeview neighbourhood — and started their seeds.

Interest growing for next season

The decision to have part of her lawn converted into a garden was easy for longtime plant lover Kathy Ferguson.

She was in the midst of landscaping her yard when her daughter suggested she let City Street Farms take the lead.

“I think urban gardening is the way to go,” Ferguson said. “Far too many people leave their gardens in weeds or dormant with just grass.”

Ferguson isn’t the only one with that mindset. Benson noted many who pass by their urban gardens have asked to get involved next year as well.

“It shows that people are ready for a little bit of change in the status quo, and that’s really encouraging,” Benson said, noting they hope to add more yards next year. 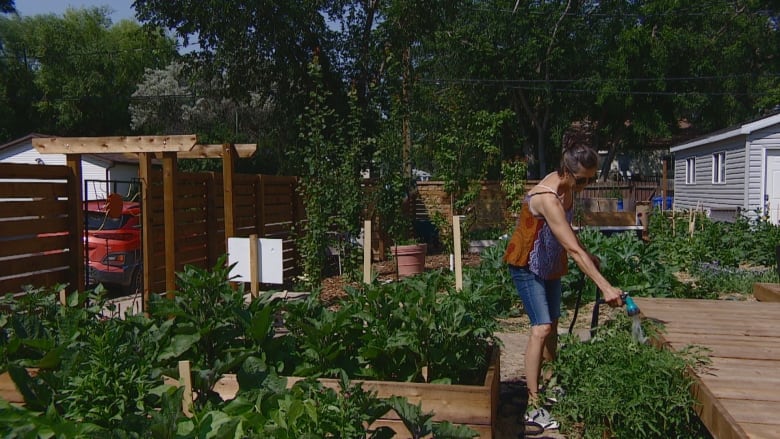 ‘I love gardening — I even love pulling weeds. The whole process is beautiful to me, and having fresh fruit and vegetables is such a bonus,’ said Kathy Ferguson, who allowed City Street Farms to convert her yard into an urban garden. (Germain Wilson/CBC News)

Despite another month left in the growing season, Ferguson said she’s already looking forward to next year. She said she plans to allow City Street Farms to expand her garden for a more bountiful harvest.

“I hope they can keep going for years and years so I can watch all the beautiful plants grow — and not have to do that much work,” she said with a chuckle.

Early in the season, the Regina Food Bank provided growing towers, equipment and soil to City Street Farms on a promise they would plant produce and herbs for its food programs.

“The need for fresh produce is grand, and we want to be able to provide that to whoever reaches out to us for help,” said Kimberley Wenger, the Regina Food Bank’s manager of food distribution.

Holt and Benson are also working on providing educational content around the growing towers to help teach students and those who use the food bank how to grow their own food.

“If everyone had a garden, we wouldn’t have an issue with food sovereignty or importing foods,” Holt said. “You don’t have to go out of town to find land to use for food — it’s all around us.”

CP Vacation Prepare set to cease in Regina on Monday

CP Vacation Prepare set to cease in Regina on Monday