Metropolis of Regina companions with CMHA to create Reflection Benches

The CMHA‘s Shannon Patton (l to r), Muna De Ciman and Regina Mayor Sandra Masters with one of the city‘s Reflection Benches on May 3, 2022. (Shane Clausing/980 CJME)

The City of Regina in partnership with the Canadian Mental Health Association (CMHA) is trying to make it easier for people to access mental health resources.

On Tuesday, the city announced it will be installing Reflection Benches in various areas around the city.

Ten QR codes will be placed over the next two years on select new and existing benches, linking users to various free mental health resources available in the area. 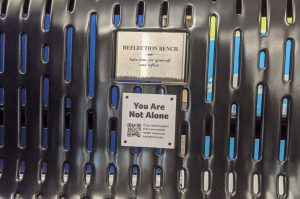 With parks across the city busier than ever, Mayor Sandra Masters says it made the most sense to get this project rolling.

“Our Reflection Benches are intended to serve as a physical reminder to our residents to sit down and take time to reflect,” Masters explained.

“It’s important to take time to check in with ourselves about where we’re at and how we’re feeling about things in our life that are going on. We want the citizens to know as a community we care, and we have their back.”

The first bench will be installed in Kinsmen Park and Masters added the project will help connect people with the resources they need.

“(A mental health issue) does not discriminate and it is found in every single community, schools and the workplace,” Masters said.

“When someone is dealing with a mental health issue, they should not have to deal with it in isolation. We want the community to be aware of the resources and support that is there for them. We want to be able to lift them up.”

The announcement was made during the CMHA’s Mental Health Week.

Shannon Patton, the director of community engagement and mental health with the CMHA’s Regina branch, said the benches are the next step in getting people the help they need.

“This Reflection Bench is a great way to let all citizens of Regina to have a place to go where they can sit, relax, reflect and refocus,” she said. “It serves as a visual queue to remember and take care of our mental health and well-being.”

The theme for this year’s Mental Health Week is “Empathy.”

Lists of mental health supports can be found here and here.

‘Now we have nothing’: Regina non-profits search donations as mercury soars