It was an opportunity to volunteer and smile for photographs, but also to see what the local food bank puts into creating a Christmas hamper.

John Bailey is the CEO of the Regina Food Bank. He said it’s great to see council members volunteer their time.

“The hope for the incoming crop of city councillors — and for those who are returning — is that we can continue to sort of work collaboratively,” Bailey said.

Christmas hampers are meant to provide multiple meals for a family around the holidays, the Regina Food Bank said. (Heidi Atter/CBC)

Bailey said the food bank is seeing 30 to 45 per cent more people seeking help because of the pandemic. June 2020 was the worst, he said, with a 105 per cent increase compared to June 2019.

He said the food bank has 30 per cent more requests for Christmas hampers as last year and 50 per cent more people using a food service for the first time.

City council is voting on a partial property tax exemption for select non-profits on Dec. 16. The Regina Food Bank is one of 26 that have applied.

Bailey said the exemption would be significant for the organization.

“We don’t receive any sort of ongoing operational funding from any level of government. So when things like a tax deduction come in, that’s a meaningful input for us,” he said.

“Every dollar we don’t spend on property taxes is three meals we can put in somebody’s hand.” 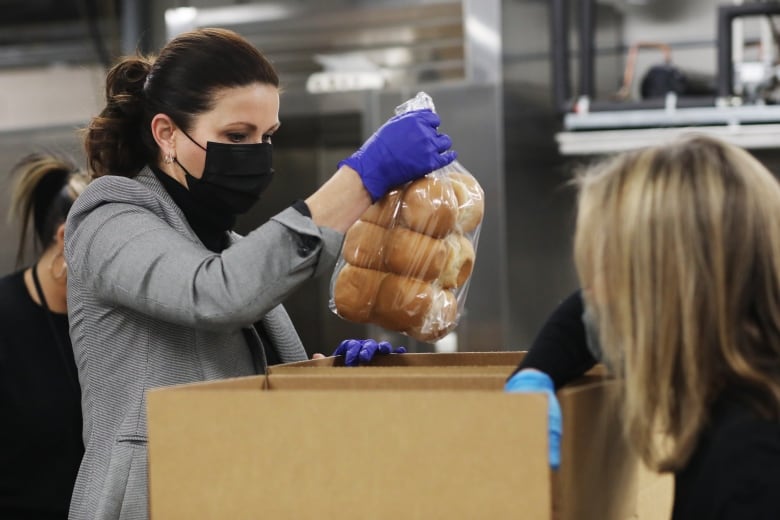 Mayor Sandra Masters said the numbers from the food bank show how COVID has hit a lot of people in the city, .

“We only have so many levers, but anything we can do to help, we’re more than willing to,” Masters said.

“If anything comes up of a more immediate nature that we could do, we’re willing to look at.”

Masters said she expects the non-profit tax exemption to pass unanimously. Ward 3 Councillor Andrew Stevens said the exemption is a start, but in the long run it would be better to have a policy in place so organizations weren’t applying every year.

“Frankly, food insecurity and the social challenges of COVID are mounting,” Stevens said. “It’s really important for everybody to recognize that and kind of do what they can.” 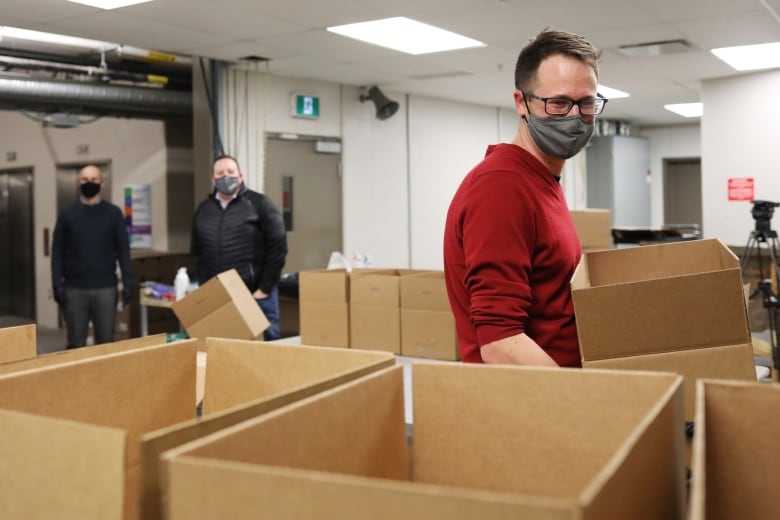 Ward 3 Councillor Andrew Stevens is one of the city council members who volunteered to pack Christmas hampers for the Regina Food Bank. (Heidi Atter/CBC)

Stevens said city council should focus on food insecurity for at least 24 months as people recover from COVID. He said there are structural problems that push people to need the food bank, such as an absence of living wages and proper income for families.

“It’s not just a temporary issue. We saw food bank usage rising over the last 10 years. This isn’t new,” Stevens said. “COVID has obviously amplified it.”

Stevens said the city needs to build sustainable solutions to the problem and look at it as a region and a province. He said it would be good to set up an anti-poverty advisory group so the newly former community wellness committee has that perspective. 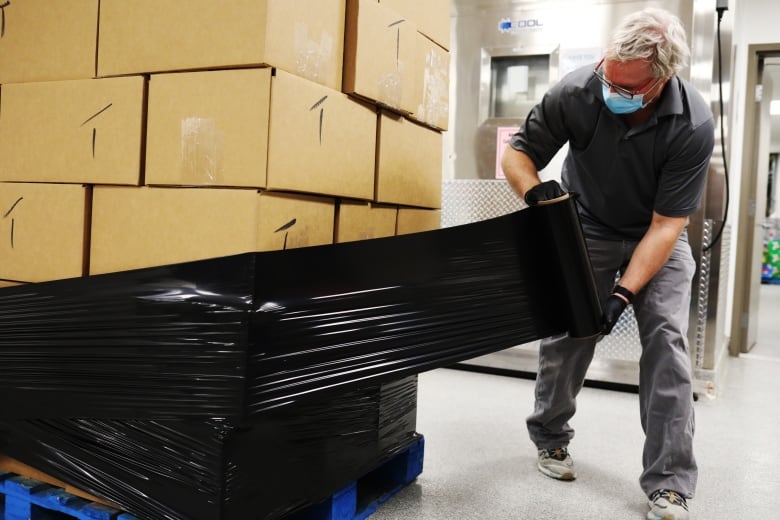 A worker wraps the completed Christmas food hampers so they can be safely stored until they are distributed. (Heidi Atter/CBC)

Bailey said he expects the economic recovery to take a long time following the pandemic and every bit of support is meaningful.

He said the food bank has been receiving less food donations than usual, but more monetary donations. As a result, it has been able to keep up with demand for now.