The Regina Pats have rebounded from a seven-game losing streak by winning each of their past four games to improve to 6-7-0-0. 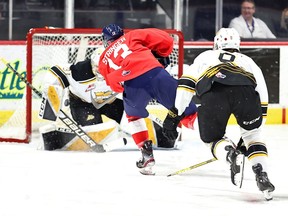 In terms of wins and losses, it has been an up-and-down season for the Regina Pats — although the perception differs within the organization.

“I don’t think it has been much of a rollercoaster for us,” Pats assistant coach Brad Herauf counters.

The approach, from the coaching staff to the players, has been to espouse a consistent message even though there has been a fluctuation in bottom-line results.

“The biggest thing is that we’re starting to get rewarded for what we’re doing,” Herauf says.

There were early rewards, in the form of back-to-back victories over the Prince Albert Raiders to begin the 2021-22 WHL season. Regina proceeded to lose its next seven games, only to rebound with four victories in a row — most recently Saturday’s 6-1 conquest of the visiting Brandon Wheat Kings.

That victory gave Regina a 6-7-0 record at the midpoint of a home stand that also includes games against the Red Deer Rebels (Wednesday), Edmonton Oil Kings (Friday) and Lethbridge Hurricanes (Saturday). All three contests are to begin at 7 p.m., at the Brandt Centre.

The game against Brandon was barely two minutes old when Zack Stringer scored on a breakaway for the Pats, who led 3-0 and 5-0 at the intermissions.

The first star, Tanner Howe, had two goals. Howe, who doesn’t turn 16 until Nov. 28, had one point (a goal) after 10 games, but has since registered three consecutive two-point outings.

Borya Valis, the second star, had three assists. The 17-year-old rookie had one goal to show for his previous eight games.

Matthew Kieper has been in goal for the Pats throughout the winning streak, during which he boasts a 2.00 goals-against average and a .929 save percentage.

Oddly enough, Pats star Connor Bedard has gone two consecutive games without a point, despite registering 18 shots on goal during that span. He leads the league in shots on goal (78).

The news seems to be flying at us faster all the time. From COVID-19 updates to politics and crime and everything in between, it can be hard to keep up. With that in mind, the Regina Leader-Post has created an Afternoon Headlines newsletter that can be delivered daily to your inbox to help make sure you are up to date with the most vital news of the day. Click here to subscribe.